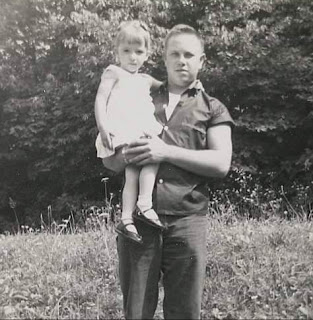 (I was asked to speak at his funeral service on October 23, 2017. These are the words I spoke to honor him.)

My name is Connie Jean. George's wife, my Aunt Benny (known as Brenda by most) is the baby sister of my father, Carl.

I am so fortunate to be just one of the many nieces and nephews of George Sines. I'm sure we all have our own personal experiences and memories with him, and I'd like to share just a few of mine.

After my father died when I was just 2 1/2 years old, my Uncle George became a father figure to me and throughout the years he has been the example I've looked to for the qualities found in a "good" man...a man of faith, integrity, honesty, who is down-to-earth, humble and kind, one who cares, one who is devoted to his wife and family and willing to quietly be there when they and others need help, one who has a good sense of humor and enjoys life and simple pleasures.

I believe that he and my Aunt Brenda truly cared for me, and they showed it by spending time with me, taking me to church beginning at a very young age, teaching me about Jesus and his love, showing me how to love others, encouraging me and supporting me throughout my school years. Aunt Benny, who is a bit of a worrier, pays attention to details, and wants things done right, was also the disciplinarian, and she would be doing things like fussing with curling or brushing my hair, wiping dirt from my face or making sure my shoes were clean and that I didn't put them on the furniture...I can still hear Uncle George saying something like "Geez, Brenda, let her be a kid!" I jokingly say I was their practice kid before they had their beloved Patty Kay! I watched how excited they were when they finally became proud parents of the child they had waited so long for and I was so happy for them...and I love Patty like a sister.

My love of music and singing hymns and gospel music especially, came from Uncle George and from attending the Irona church where he would play guitar and he and Aunt Benny would sing songs that she had printed in spiral notebooks. Going to Sunday School, church, and revivals with them, watching and hearing them pray, going from playing in the floor, to sitting in a seat, to standing on the platform in front, to kneeling at the altar...all gave me a firm foundation in Christ, leading up to my baptism In Wolf Creek as a teenager by an evangelist who was preaching during a revival.

Along with church, our many conversations, and singing songs, I have fond memories of such things as our picnics, leisurely drives, and learning how to ride a motor bike while he was sitting behind me giving instructions. Who would have thought that a policeman would just happen to be on Blazer Road at the same time! Well, we were stopped and I was a little scared, but Uncle George calmly answered questions honestly, telling the officer, "... no, she doesn't have a license to operate" (after all, I was only 12 years old!), that he was teaching me and was in control of the motorbike and, "...yes sir, we will turn around and I'll get on the front and drive us right back to the house. And you have good day, too, sir!"  That worked!

Uncle George was a simple man who was content to live modestly, work for everything he had, take care of his family, eat simple country meals, mind his own business, serve the Lord, sing and play guitar and other stringed instruments by himself or with friends.

He was a frugal man...he didn't throw money away, but he also wasn't afraid to spend it on his family or on a vehicle he liked...and he has owned many nice ones through the years. Over the last several years, one of his favorite things to watch on tv was The Price is Right...and even though he liked to guess the price on the items, prize packages, and trips...it really made him happy when folks would win and be excited, happy, and smiling...and he would be happy for them.

He believed in justice, fairness, and treating all people the same. You didn't have to wonder what He thought...He disliked liars, thieves, freeloaders, lazy or mean people. And if you wanted to start a conversation with him, just mention politics, politicians, and the government! He definitely had opinions on those things.

I hated it when his health began to deteriorate and it was difficult to watch him when he was in pain, had difficulty breathing, and was unable to do the things he loved. He would become frustrated and discouraged and wonder how a loving God could allow the things he was having to endure. I don't know why, and the doctors didn't have many answers, but I believe that Uncle George has now learned those answers and the answers to the rest of his questions. I believe that Uncle George would tell you all...God is still a loving God, Jesus loves us and willingly paid the price for all our sins, Heaven is indescribably beautiful, and all our suffering and troubles and trials here will be worth it all when we get to Heaven by trusting, believing in, and serving our Lord and Savior. No matter how your life on earth has been, even if you think you've got it made, you didn't get it all on your own...and nothing compares to Heaven.

Uncle George, I love you, I thank you, and I'll miss you...until we meet again.  I want to remember and see those twinkling blue eyes and ready smile, hear that slightly ornery laugh, and the beautiful singing voice with no struggling for air and no pain.  Until then, keep smiling and singing and enjoying your Heavenly home!


(Copyright by C.J. Taylor.  Please do not copy or share without permission.)
Posted by CJ - "Invisible One" at 8:39 AM

CJ - "Invisible One"
Thanks for visiting! Please check back often; this is a "work-in-progress", just as I will continue to be until I draw my last breath here on this earth! I've never been able to decide what I want to be/do when I grow up! I am just one individual, a student of life, with one voice, with a variety of interests, and with many thoughts and feelings. Can anybody see me? Can anybody hear me?